Drinking is a big part of British culture and with summer on the way, many of us will be having a few beers or wines in the sunshine.

However, since 2005 the amount of alcohol being drunk has fallen with more and more people choosing moderation or teetotalism.

Many are concerned about the risks of alcoholism and binge drinking.

But where is the line between moderate drinking and alcoholism? It might seem like we should know when we are occasional or heavy drinkers.

The truth of the matter lies in a lot more than several units and drinks per day.

One of the biggest issues with recommended limits for alcohol is that they vary from country to country and person to person.

Some factors include height, weight, gender, age and general health.

While the NHS recommends no more than 14 units a week. Although you should spread these out over at least 3 days.

However, France for example recommends no more than two alcoholic drinks a day and a few breaks in between. If we say drinking for 5 days, this adds up to only 11 units a week.

This seems to favour moderation in drinking in a single sitting than overall consumption.

Of course, on the other side, there is a recently published 26-year study by the Lancet on safe alcohol levels. This study concluded that the only safe amount of alcohol is none. 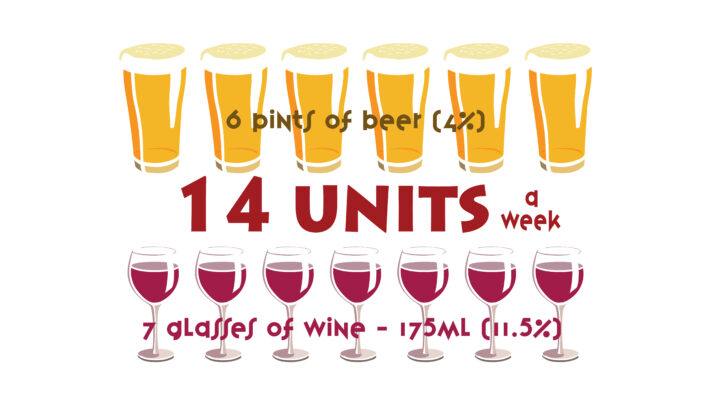 Am I an Alcoholic?

The actual figure of how much you drink is only an indication of alcoholism.  At its heart alcohol addiction is about how you feel and your relationship with alcohol.

For a person to be an alcoholic their drinking must result in a problem. This could be physical, social, or psychological.

If you continue to drink despite it having a negative impact on your life you may be an alcoholic. People who are addicted to alcohol do not have complete control over their drinking.

Drinking too Much vs Alcoholism

Drinking too much and regularly raises your risk of alcoholism. The reason for this is the way alcohol affects our brains.

As it changes the reward centre of your brain alcohol causes your body to adjust to alcohol making you happy and relaxed instead of real-life things.

The more you drink the worse the problem becomes until you struggle to be happy without alcohol.

This can worsen or cause mental health problems such as depression, anxiety, and mood swings. That is why alcohol causing a problem is a strong indication of alcoholism.

Is Drinking Alcohol Every Day Bad?

When we drink our liver, stomach, heart, and brain all must work together to deal with alcohol in our system.

Our brain adjusts to levels of alcohol in the body. It will take time and discomfort to return the body to normal. This is what a hangover is.

However, if you are experiencing severe symptoms when you stop drinking then you may be having alcohol withdrawal.

Our body is miraculous and even severe alcohol drinkers will be able to detox within a few weeks.

If you drink every day though, your body never has time to recover. This means that levels of dopamine, serotonin, and GABA (important for your mood and nervous system) become slowly lower and lower.

Are you drinking 12 Beers a Day?

There is a reason so many people want to know how 12 beers a day impacts you. This is the normal size of a large pack of beer from a UK shop.

Drinking 12 beers = 24 units of alcohol already double the recommended weekly limit. So you are drinking too much if you drink 12 beers a day.

Whether this is alcoholism depends again on what problems it causes. Although, drinking the entire case suggests you are not able to stop drinking until you have run out.

Alcoholism is characterized by the inability to stop drinking once you have started. Also, by continuing long after the problems start.

How Long Can You Live Drinking 12 Beers a Day?

Alcoholics have a lower life expectancy than most of the population. There are several reasons for this.

Prolonged heavy drinking can cause damage to your heart, liver, and stomach. Also, the weight gained due to drinking an extra 1,500 calories (12 cans of lager) can cause obesity and weight-related issues.

If you are an alcoholic and drink 12 beers a day you will live on average 24-28 years less than average This is around 50 years of life expectancy for men and 55 for women. The international average from the Lancet study on alcohol and risk was estimated closer to 40 years of age.

https://www.ncbi.nlm.nih.gov/pmc/articles/PMC4402015/ Mortality and life expectancy of people with alcohol use disorder in Denmark, Finland and Sweden